Interview with Italian Fetishman of the Year 2019

A great interview with the newly elected as the first Italian Fetishman of the Year (IFOTY) by Leather and Fetish Milano e Leather Club Roma. The new mister speaks about his first months as a title-holder and about his strange relationship with ducks.

Chris: Sooooo who should we thank for having you as European Title-holder as Italian Fetishman of the Year (IFOTY)? Who convinced you to join the fray? But above all… how did he do? 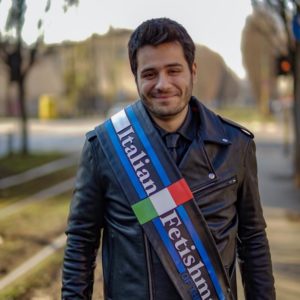 IFOTY: To be honest, there was a lot of people asking me to do this. I wanted to, but I’d liked to wait. Maybe some years! I wanted to have more resources and experience. I changed my mind when someone told me “If not now, when?”. Touching “time” issue is the easiest way to make me do things.

Chris: Which kind of year do you expect? 12 months like Miss Italy, among glossy magazines and inaugurations, or something more similar to Hunger Games, with deadly traps at every corner.

IFOTY: Ahaha, just kidding! I want this year to be productive and really busy of stuff to be remembered as a good mister!

Chris: Your sash tells us that you are a fetishman. What does it mean for you? Which are your favourite fetishes?

IFOTY: I always believed my fantasies were homosexual cliché, but I sadly discovered, especially in my former relationships, they were not. So, I started a journey discovering myself to understand how much I care about this world in my sexual life. The result is in front of your eyes! My fetishes are growing up every single day but uniforms (leather or rubber) are the greatest with every single role play declination.

Chris: A serious question: could you explain us your strange relation with ducks? Especially with Dodo… 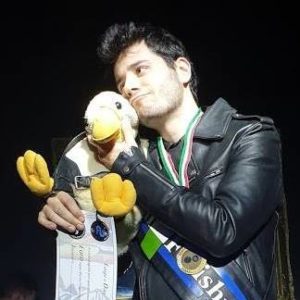 IFOTY: Like best stuff, it was born by chance. Ducks are beautiful and funny but also incredibly dumb. Really. They are the icon of stupidity. I find this thing adorable. Quack! Anyway, my “quack” thing is born after a trip in Berlin. Me and my friend Stefano were walking in Schöneberg area and we needed a simple way to tell each other, well, “there is a notable guy over there”. We decided to say “quack” for cute guys, two “quack” for hot guys, three “quack” for “suddenly I have ovaries”.

Chris: I’m not sure to wanna know the rest of the story…

IFOTY: Just think about these two guys “quacking around” the streets of Schöneberg. The twist of the story was my friend going for “woff”. We understood our scale measurement was finally complete. “woff” is for the overflow. There is no surprise I went completely crazy when I discovered Rome club mascotte was A DUCK. A DUCK. DRESSED IN LEATHER. A DUCK WITH CHAPS AND LEATHER VEST. IT’S FUCKING ADORABLE, DAMMIT!

Chris: For your fans who wanna know everything about you… Are you single? Have you a boyfriend or not anymore? Are you searching for him? Are u in stand-by?

IFOTY: I’m single and still searching for the chosen one. I’m a romantic pervert! Turn away if you don’t like ducks! ahaha, I’m joking!

Chris: Where are you gonna be during the next few months? Which is your travel program as IFOTY? 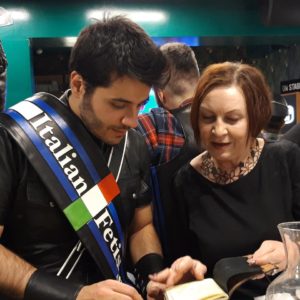 IFOTY: My agenda is busy and growing fast! I thing I need to publish it somewhere! As of today, I was in Antwerp for Leather and Fetish Pride in Barcelona for Barcelona Spring Break and in Milan for Mr Puppy Italy and in Rome for Mr Rubber Italy election and I will be at Folsom Europe, Nice so Fetish in France and also some Pride parades in Italy and abroad. But I think it’s just the beginning.

Chris: Well, I think we will see you at the AGM in October in IFOTY: Absolutely! This year AGM is an Italian duty! I’ll be there for sure to represent my country. Maybe as a candidate? Who knows! Time will tell if I was a good mister! In that case I will consider this as a second adventure.