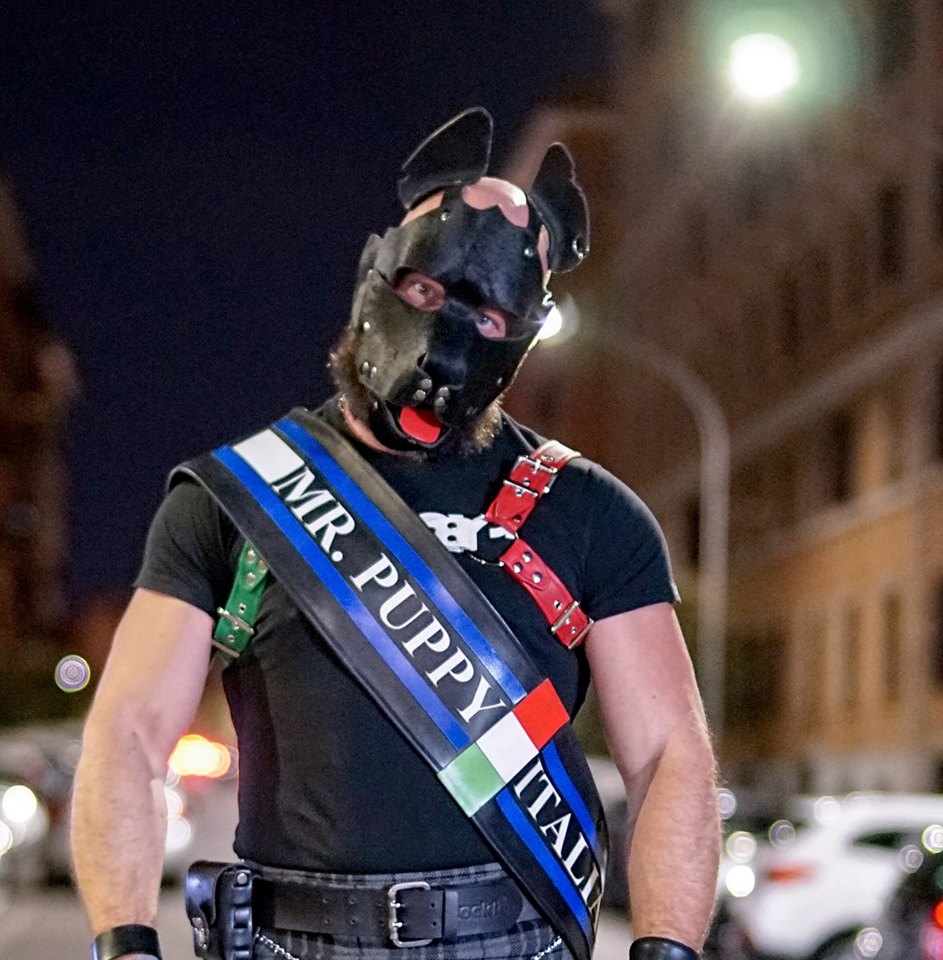 Siriuuuuusssss??? Didn’t you think you could avoid this interview?

Oh my God, the witch of Hansel and Gretel…

That’s a bad start… anyways, tell me, should I begin with a “woof”?

Everything starts with a woof. Woof to everyone!

In my fantasies, a puppy is absolutely far from your physical appearance.

The most common stereotype of a puppy is the classical twinky boy, who loves sneakers and rubber. Actually, this idea agrees only with the first images of puppies seen in Italy; today – fortunately – there are puppies with very different looks and ages, and the twinky stereotype is disappearing.

Did you have any problems being recognized as a puppy?

Since I am a puppy, and we are going back to the Second Punic War, countless times I’ve been tagged as “not a puppy”, because of my personal history, because of my fetish interests and because of my temperament. No one ever tried asking me why I feel that I am a puppy; which are the reasons that lead me to living my animal side in this way.

If I’m not wrong, also your performance at MPI19 was focused on showing that there no archetypical puppy. How did it come to your mind?

In Antwerp during Leather and Fetish Pride Belgium. Being there and watching the performances during the Mister Puppy Europe competition opened my eyes. Buumi’s exhibition literally made the other gigs disappear, no matter how much expertise and care were behind them. Ideas are stronger than talent, and I decided to directly face criticism; I am what I am, for better or for worse; I am a puppy because I feel it inside, because of the joy and serenity that puppyplay gives me. Who I am to judge the others, and say “you can” and “you can’t”? Hence the game of opposites, muscle/twink, top/bottom, leather/rubber, up to the “values” of puppyplay, the game, the fun, friendship, brotherhood, sharing. 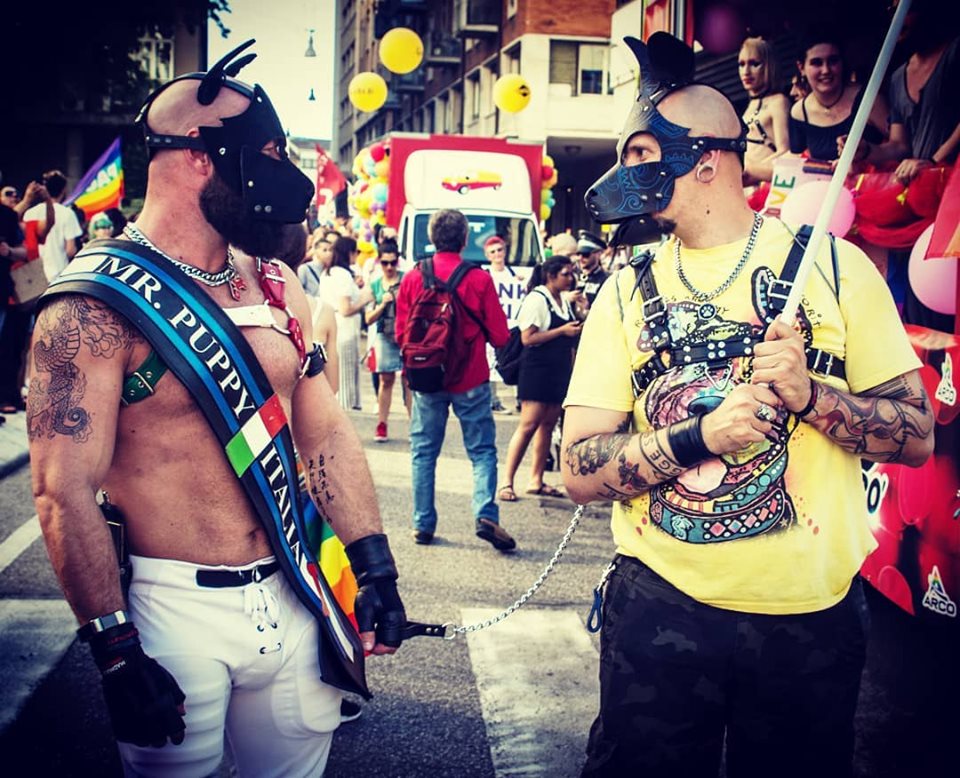 Italian puppies come from a year, how can I say, intense. Now that you are front-man of this part of the Italian gay-fetish community, what do you with for the future?

Well, after the first year, in which Zaush laid the foundations, collecting his legacy could not be easy. Things happened that led to the dissolution of the group itself, though for a short time. Then, thanks to the commitment of puppies who did not want to leave each other and be alone, the pack was reborn, even though for some times it was left without a guide. Misunderstandings and difficult temperaments, including my own, brought to arguments, desertions, and returns. But even after the worse storm the sun comes back, maybe with a wonderful rainbow…

And did you get the rainbow?

Yes, we had it during the Puppy Games afternoon, playing together, having fun, spending our time laughing and joking. The group got stronger and even newbies felt welcomed. I wish for this group to grow even larger, and I hope that the geographical distribution of puppies will allow for more frequent meetings, even for a simple pizza dinner, without the need to cross half of this country to do it.

Back to the future… which are your goals for this year?

Goals… the first and most important is not to repeat the mistakes of the past, promoting aggregation, being a point of reference for my pack and for those who are attracted and interested in puppyplay. Helping each and every pup to find his/her road in the fetish world, his own corner of paradise where he can be himself, surrounded by his counterparts, without shame or fear.

But where do you find all these puppies? It’s starting to look like One Hundred and One Dalmatians…

Hahaha, can I aim for a new fur coat, then?

Animal-rights activists would not approve

Jokes apart, the fetish and especially leather world is seen from the exterior as an exclusive niche where it is often more important what is worn than who is wearing it. Me too, at the beginning, I felt left out or ignored. Luckily, the last Misters are trying to change this “exclusivity” of leather, and I am very grateful for that. But still, gear is expensive, and not everyone, especially students or newly hired, have the means to even start their fetish wardrobe. Puppyplay has the advantage of being cheap; of course, hoods are expensive, but much less than a pair of leather pants. You can wear what you want, there are no rules beside those of common sense and everything is much easier. Want to name it “light fetish”? Anyways, for young people puppyplay is easier to approach than other fetishes, and the playful and emotional aspect is very strong and attractive. 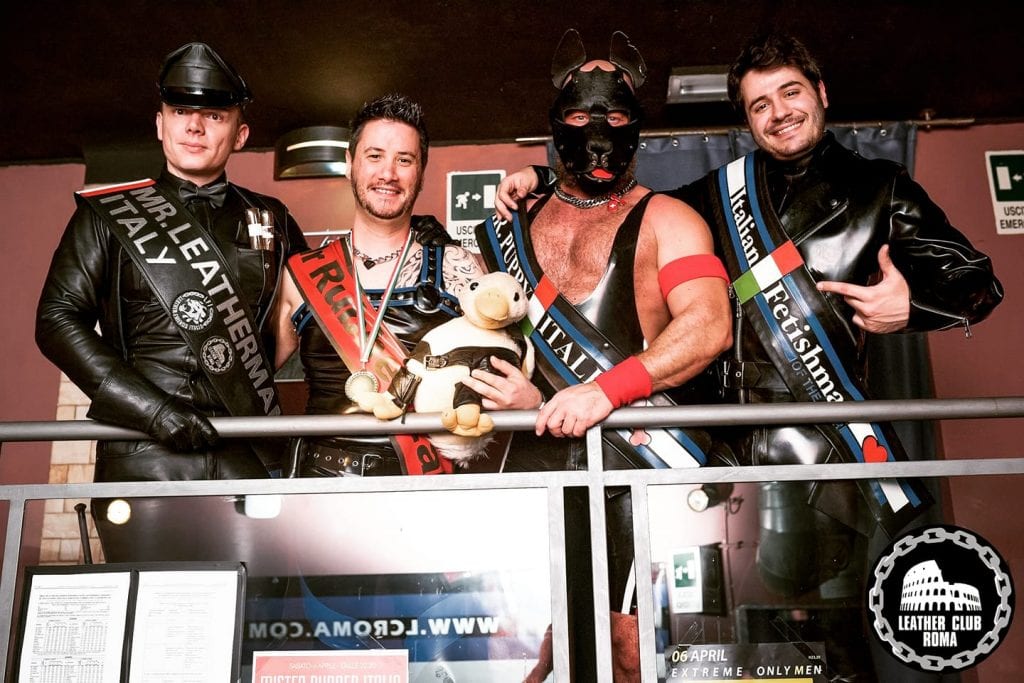 How was the passage from the role of sash-wife to sash-holder?

Hahahaha, I’d rather say sash-Master than sash-wife. When Aaron left, there were many chances. I believe the Mister title is a very important symbol, and the possibility of a title vacancy for three months gave me goosebumps. Therefore, I spoke with Inky, who was first runner up last year, and explained my point of view. He understood and accepted the task, and I was very proud of him. From my side, I did not interfere with his activities as Mister in the last months. He knew I was beside him, but everything was in his hands.

Well, he was very good. He was able to guide the puppy community in a difficult situation.

He did his best to be present in the group and in official occasions, and I think he will leave a nice memory of his short time serving. As I know him very well, I’m sure he would have been a great Mister even full-time. Now it’s my turn, but as of today I can’t say I’ve done so much, except for showing up at official events. I’m surprised by the warm welcoming I’ve received so far. Then, time will tell.

The next steps? Thinking about Mister Puppy Europe?

More than I could imagine, actually. I’ve been in Padua, for the election of the new Mister Leather Italia and to celebrate Tom as he deserved, and to the Pride in Milan at the end of June, to show puppyplay in open air without shame, and I will go to Berlin in September to bring Italian puppies to Folsom Europe. In October, Rome is waiting for me for AGM… and then we’ll see, other ideas and journeys are in my mind. It is still too early to think about Mister Puppy Europe and too many things make me think I should say no, first of all the fact that I could not honor the title as it deserved, but never say never. I wasn’t supposed to candidate for Mr Puppy Italia either.

Ahahahah, I prefer Dante, the pup in the movie Coco; he is stray, mangy, awkward and clumsy, but he is a faithful dog and he helps and protects his owner despite his miserable condition. At the end you understand that the look does not matter, but it’s what is inside that’s truly worth.