Mister Puppy Italy, the one and only, for the moment, because you are actually the first one … It’s a huge responsibility; How do you feel about it?

Yes, it is a big responsibility, at first I was a bit confused, I have never been a representative of a national community, but now that I decide to create an active national group and get it out I’m more relaxed. I’m doing it with media and socials to improve the fugure of human-puppy in Italy. I was interviewed by some Italian and foreigner websites and even by more important media, such as Radio DeeJay’s for its night program. At the beginning I nearly shit myself, but then I loosened up. They say it was a good interview.

I just hope that all my efforts will be useful to bring new puppies closer to this world.

Give me three key points to define a puppy, its attitude and the difference between a puppy and a doggy slave. 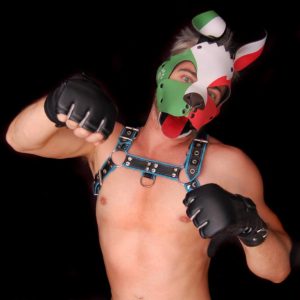 During the last year, puppy play has become more and more popular, especially among those who approach fetish scene for the first time or are new in kinky stuff.

First of all, being a puppy is really funny. It is a chance for people to escape from the stress of everyday life becoming, for a certain period of time, an “innocent” animal with few responsibilities.

Most guys appreciate this practice because it allows them to be in a submissive role, being cuddled and playing with other puppies. The role play is not very different from master/slave play. The relationship needn’t to have a sexual nature, but it is usual. More often, it involves two puppies instead of  than of a handler.

Actually the idea of ​​puppy play changes for everyone, but generally it does not involve so much punishment or humiliation as a slave role. After all, owners care and love their pets, isn’t it?

And what about Zaush in his everyday life? Don’t tell me that your favourite movie is “One Hundred and One Dalmatians”…

No, my favourite movie is Zootropolis! Seriously… removed the mask I have a pretty normal life with a quite normal job (I am a communication consultant, web designer and the social media manager).

I usually keep a lower profile than when I am Zaush. In fact it is my most exuberant alter ego, as if it was my outgoing and sweetie twin. As a puppy I take liberties that I usually would not take. Let’s say I loosen up. It sounds weird, but sometimes the only way to show everyone as you really are is wearing a mask (Zaush Nacolno).

What about your relations with other fetish?

I like sportwear and skin so much, but only related to my gear (harness, code holder and so on). I also like military clothing. In bed I’m very changing, so I always try to explore new things, but I do not like extreme or dirty practicies.

You took part in an important event like Mr Puppy France: what about it and how was your meeting with the European scene.

In Paris I met other European puppy misters and who will be probably my competitor for the next European title. However it was born immediately a spontaneous complicity. It was nice to meet many puppies, friends only on social networks, and see that they were really happy to meet all the misters that are working to be the representatives for their national communities.

I received a VIP, Very Important Puppy, treatment. Something that I will always bring with me is to read on Facebook a puppy’s comment. He said that being present at this event excited him, because he knew some guys he followed online and that he felt an overwhelmed due to have met so many European misters. As he said, he seemed to participate in the concert of his favourite group with special tickets to meet his “idols” behind the scenes.

Absolutely! If the idea of attending rallies could only have a personal motivation to meet other puppies, have fun and so on, now it will be also a commitment that I wanna take to satisfy and, above all, to say thanks to all the followers (puppies and not) because in some way it’s also for them that I am here today.

Let’s make a jump forward… you’re at the end of your kingdom as a mister: what are the goals you would like to have achieved?

I would like to be able to create a fixed appointment for Italian puppies, something that makes them united and gives the chance to introduce novice puppies. I would like to realize a travelling event that can be hosted both in the north and in the south where for puppy there is nothing actually. At least for the moment… At the end of my year I would have left my mark (like a paw maybe).

Any thoughts about Mister Puppy Europe?

Of course! I will compete for the title next February in Antwerp. I’m just a little worried about the commitment. Unfortunately, apart from being hosted by the organizers of many European events, we do not have such sponsorships to travel a lot and to bear the costs of each trip. We pay most of them for our pocket.

So if you came to Rome, we should prepare for you some crunchies, isn’t it?

Well, maybe not, but perhaps a nice steak with the bone!