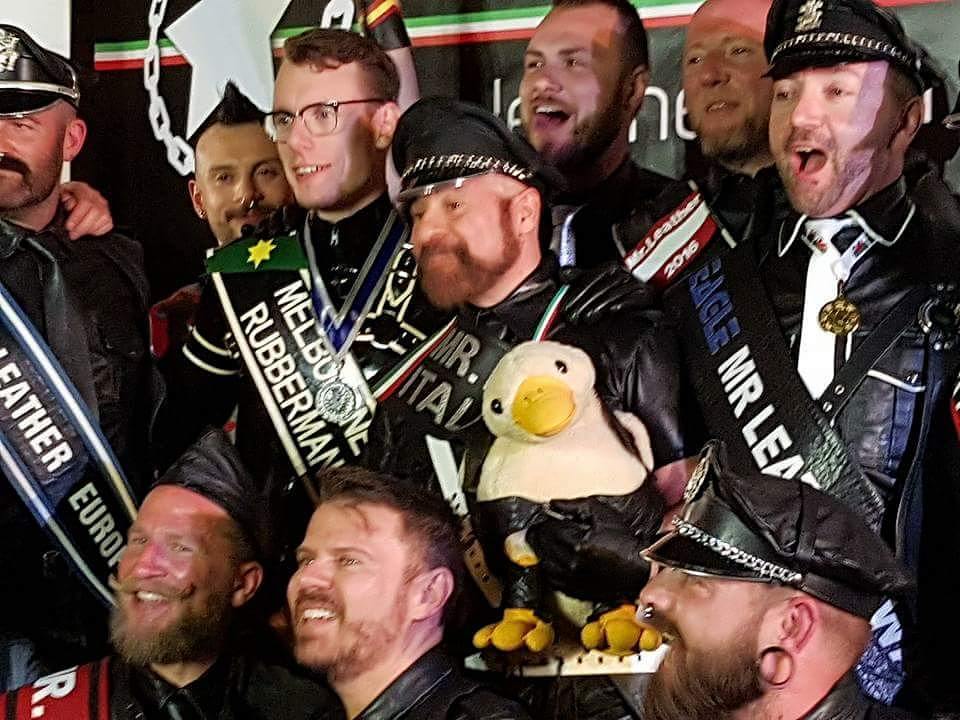 In one of your first posts as a mister you introduced yourself as a gay, a parent, a LGBTQIA rights activist, but I would also add a working man, a partner, leatherman and I could continue …

The question is: how do you do everything?

In fact, I have loads of energy, this is a bit of a distinction, I always try not to waste my time and multitask. But I have to admit that over the years I have had great support in family management by my mom and my partner. I have a good relationship with my former wife. Our daughter has been raised by both of us and now, as she is an adult woman (she will be 19 in June), my personal spaces have increased.

How did we get to the current Fabrizio who became Mister Leather Italia 2017?

Absolutely step by step, especially because my life’s priorities have been different for a long time. I split up with my wife when my daughter was only 3 and from that moment I began to realise my homosexuality and to live my fetish interests. At the beginning I had relationships with guys who did not share my fetish, but I tried to increase my leatherman soul with the right purchases, especially boots, which have always been essential for me.

And all the rest? I can understand your passion for boots, but for the election you were a  perfect  leatherman head to toe…

Well I always had jackets, but pants came long after that. Now, they are part of my outfit. When I started traveling in Europe for work I managed to get some leather clothes in Dublin, London and Amsterdam. The discovery of stores like Mister B and Rob took place in Amsterdam.

When did you start attending the fetish scene?

I had my first contacts with other leathermen in 2008, during a break with my former partner. For the first time I felt the thrill of wearing full leather and be taken around in a bike by my first leather-mentor, Maurizio TomOfBiker. Then in 2010, when I ended the relationship I spoke about, I improved my contacts and strengthened the friendships I already had, first of all in Tuscany (I have to mention Luca, Roberto and Dennis who together with Maurizio were milestones in my first experiences in the leather scene).

How did the meeting with Italian gay-fetish associations take place?

As a single man it has been easier getting in touch with Italian fetish clubs. My first party was in Milan with LFItalia at the end of 2010 and thanks to that I have been able to finally meet friends I had been chatting to and with whom I have been in contact ever since. But it was in July 2013, when the story with Costantino (my current partner) began, that my leather passion has become a reality even in love life, shared and lived daily. Just consider that after a month together, we were already in Berlin! The first big fetish event that we attended was the 2013 AGM in Padua.

So a Florentine discovering Veneto…

Well, that was just the beginning! During the following years I have met the other Italian clubs: Leather Club Roma in 2011 (I first met Fabio and Paolo and then Massimo) and later LFMilano, established more recently.

In the last few years I have increased the participation in Italian fetish events (meeting so many new friends) and I have also been able to do some experiences abroad.

What kind of mister would you like to be? What is your main goal for the next twelve months?

Of course we all are so much more than that; I’m gay, a father, a LGBT activist, an engineer, a partner, a leatherman … nevertheless sexuality is an important and fundamental part of our personality that cannot be left in a corner. And for fetish people this is even more relevant as we express it through what we wear. I would like for this aspect to emerge during the next few months.

Yes, right! And with the title of Mister Leather Italia this is even more important to me: it’s a bit like saying “That’s a part of me and that’s fine.” Maybe my freedom of expression and the different passions I have are some of the reasons why I have so much energy, as we mentioned at the beginning.

As a representative of the Italian leather-fetish community, I would like to make a contribution by being a role model showing we can live our sexuality together with all the others aspects of our lives, even being a man who has educated and grown a daughter as a single parent. Another important goal will be collaborate with all the associations to enhance our community and the potential of the Italian leather scene.

The three Italian clubs have started organising parties outside the classic places (Milan, Rome and Padua): how do you feel about this “delocalisation” and what do you think could be done in Tuscany (our region) to support the development of a regional fetish scene? Also in other regions obviously …

Tuscany is begging to have its own important representation in the fetish scene. After your victory as Mister Rubber 2016, this year at the Mister Leather competition two competitors on three were Tuscan. Maybe we feel the need to be present and acknowledged. You should also consider that not everyone can afford to travel abroad, so I think it is important to organise more events in Tuscany and other Italian regions. 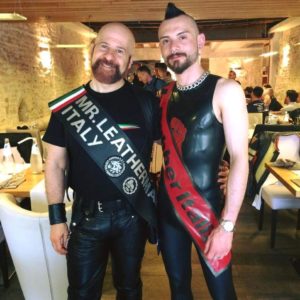 Yes, and it was a great event!

But I think it’s not so much about having a party per year, that’s not enough to improve a local community. It would be nice if the Italian fetish clubs promoted more “delocalized” events, ​​supporting the raising of active local groups. That way they can give continuity to the initiatives and promote the leather scene even in local contexts.

I totally agree with you! Take me for example, a born and raised Tuscan guy, who discovered the fetish scene in Rome!

Yeah … you should also consider that so many guys do not approach the leather scene because of lack of raw material, leather items I mean, for economic reasons or just because just having a pair of boots at home may not be accepted by their family. That is why it is also necessary to improve the possibility of exchange among fetish people, with live meeting and not just with virtual chats. To be able to have those socialising moments, like dinners and brunch, are great opportunities.

I would like to go back to your condition of a parent … how did your daughter get the news of your victory?

I could not have applied for the competition without my daughter Lavinia knownig! On the contrary a great motivation to participate was just the enthusiasm that she showed about that. She asked us about our trip to Padua and when we told her about the contest and my idea of ​​taking part in that, she said something like: “Really daddy, could you take part in the contest? No, that’s amazing! Go!!!”. With my partner’s and daughter’s support, the leather heart melted and the decision began to feel more real.

What kind of difficulties did you have in your life as a homosexual parent?

My road to acceptance, with a daughter born in a heterosexual relationship, led me to facing real problems, making my own experience. At the beginning I did not have many people around me to talk to who were living my own condition.

Parents who accept themselves as gay or trans, after a marriage or a heterosexual relationship, often didn’t recognized their own sexuality during the youth, because of their family and social environment, the lack of sexual education in schools. Because of the social homo-transphobia that denies the possibility of recognizing themselves as gays or lesbians or in a gender identity different from the one written on their ID. That’s why we are trying to live in a ‘normal’ way to feel accepted by our family and society. Due to this situation it becomes difficult to live our own life without a sense of guilty towards heterosexual partners and our own children.

Is homo-transphobia still embedded in our society?

In the past, being a parent and homosexual seemed to be two irreconcilable concepts. Now, thanks to the visibility of rainbow families, we are more comfortable with this idea, but still a couple of fathers with children is something that is not completely accepted, while the idea of ​​a couple of mothers seems more simple. But there are also transsexual parents; think about the “average” attitude of the common citizen towards them.

An extremely delicate topic, that you have been trying to face in a practical way through the association Rete Genitori Rainbow.

That’s right. We created Rete Genitori Rainbow, with two mums and another dad, to support other parents who live in the same condition. Through the website www.genitorirainbow.it, a dedicated forum, a listening line and self help groups, we can meet in a protected environment with people who have a similar life experience. Talking together, everything becomes easier to solve, we can do steps in managing separation, coming out with family, and with the children, in living our lives as homosexual or transsexual, in introducing new partners into our large family and in general in all the everyday life experiences.

For the last question I would like to speak about something not so serious… Your plans for the upcoming months: where will we see you?

I know how important it is to be a community representative. That’s why I think it’s crucial to actively participate in events and be visible in the European fetish community. The role played by the Italian associations has historically been fundamental and continues to be indispensable to support and give dignity to Italian fetish scene.

My priority will be the Italian community: I have already been in Rome for the LCR closing season party and at the end of May I will be in Turin with LFI. Not to forget the parties organised by LFM. With my mister-mate, Joy Gen, Mr Rubber Italia 2017, we will try to attend most of the events organised by the Italian associations. My first European trip will probably be the World Pride in Madrid and then the Leatherparty in Hamburg in August with my daughter. I think it will be a good test for me and an experience for her, but also for all the other fetishmen who will be there. In September I will attend my first Folsom, while in October I will be in Amsterdam for the AGM and Mr Leather Europe.

And then, well, I cannot tell you everything!