Let’s start from the beginning… How should we call you? Gennaro, Gen, Joy, Joy Gen? Please tell us as this is a doubt many of your fans have

Ahahahahahahhaha well, we are really starting from the abc! So… I have always loved signing as “Gen”, because everybody calls me Gennaro or “Gen”. Everyone but my best friend. She was the first one calling me “Joy”. Now most of my friends don’t remember my real name… sometimes that is not pleasant, as it seems they don’t really know me. However, try asking someone to pronounce Gennaro abroad! Ahahhaha… Joy or Gen are much easier. 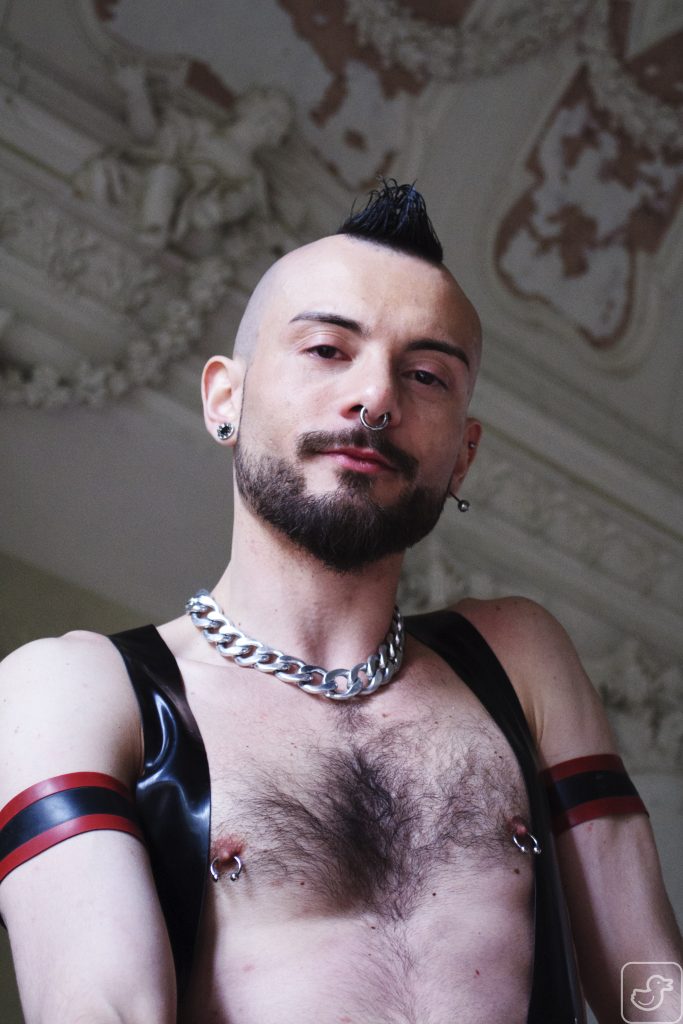 What about your age? I know we shouldn’t ask the age of a mister, but your fans want to know it. There are rumors about some milestone you are going to reach during the next few months.

Last year I celebrated my 18th birthday and with that the driving license, high school diploma and maybe soon even Master degree in chemical engineering (I could start working for a rubber producing company).

You are a journalist not a mathematician!

When was your first time in rubber then?

In September 2013 I saw a flyer for the first edition of Fetish Pride Italy and I was really surprised at discovering the existence of a fetish club in Rome. Thanks to the meeting with the Rome Leather Club I tried a pair of rubber pants for the first time. No way to misunderstand the spontaneous erection that I had. Rubber is a second skin, something that you can’t lie to… it’s not only a shell that covers you, but it is a layer that becomes a part of you. It catches you with its smell and turns it into yours.

Do you have a rubber item that you couldn’t give up? And which one would love adding to your collection?

Let’s play a game… I will tell you a place and you tell me a memory about that, something linked with fetish. Berlin…

My heels are still aching for the long run trying not to be late for Darklands. I believe the thing I will never forget about my first Leather Pride Belgium is not the fetish scene, but the joy and the awkwardness od wearing the sash amongst so many strangers without the possibility to speak in Italian. Despite my look, I’m pretty shy. 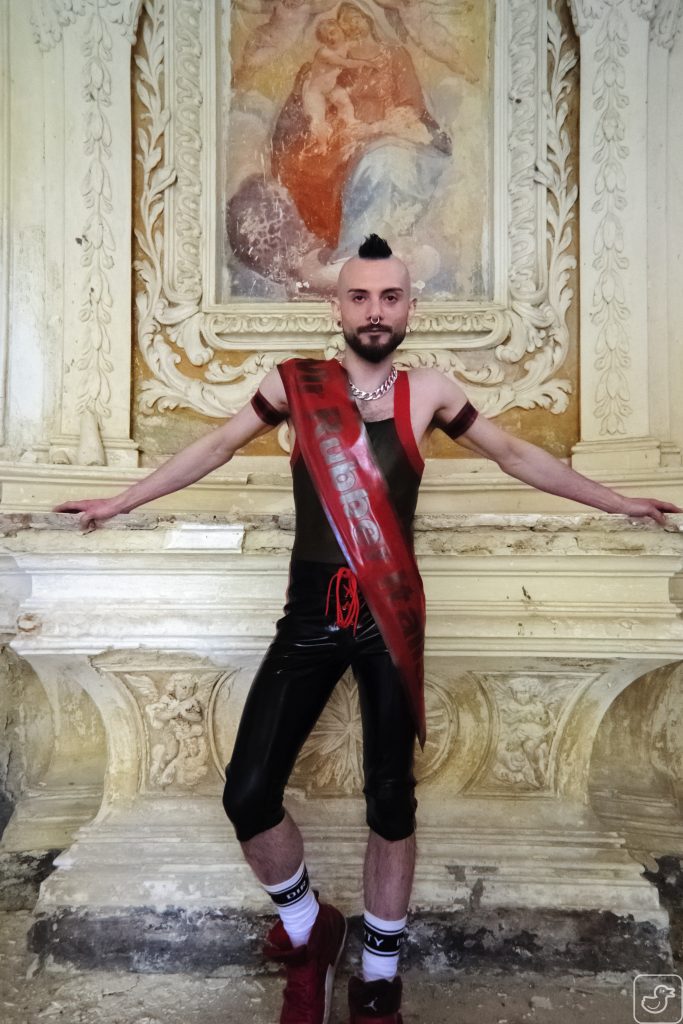 What do you think about the Italian fetish scene?

It has the potential to be great, but it seems inconsistent. From my point of view, the two key factors for a real improvement of the community in Italy often waver: on one side the internal cohesion, that we need to build something important and to fight against the hostility of people not involved in fetish, on the other a little bit of shameless self-confidence, which is useful to be brave and not to hide ourselves or to give in to conventional models. “Italians do it better”, but if we hide ourselves or waste our energies with useless battles, no one can realize that.

Let’s talk about dreams… what is the most important one for you to achieve during your year as a mister?

I would like to create a stronger connection amongst European rubbermen. Unfortunately, the rubber fetish continues to be a bit marginal compared to leather scene. Maybe it’s also because there are less rubber events than leather ones. However, in Antwerp I saw more rubbermen taking part in the events, that’s great.

My dream is the creation of a European title, a Mister Rubber Europe elected every year and supported by ECMC, as occurs for Mister Leather Europe. After all we are as important as the leathermen. This is a goal that I want to commit to throughout my year and more, until we find a solution to that.

And what about MIR 2017? Is it a dream, a concrete possibility or just a hope?

O Gosh, I would have rather kept it a secret… but yes, I would like to take part in Mister International Rubber in Chicago. However, I think it would be more realistic to consider that next year. November is just around the corner. I don’t think I have a big chance in that kind of contest, but I would like to explore the American fetish scene, establish an international network and take part in what I consider the biggest event in the world for the rubber scene.

At the end of April Neri, the current Mister Leather, will celebrate his step-down: what are your expectations about the new Mister Leather Italia?

In addition to be my mate for all our tours in Italy and abroad, I hope the new Mister will be committed with me to guarantee and preserve relations amongst the three Italian associations, in order to promote the Italian fetish scene in Italy and abroad.

Last question… everybody knows your problems with timekeeping… has anything already changed during the first months of your tenure?

As I mentioned before, my sore heels would probably disagree with that…